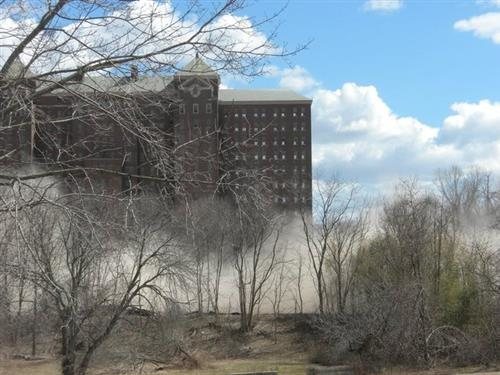 Established in 1885, the Kings Park Psychiatric Center was originally constructed to be a beacon for mental healthcare, aiming to avoid the overcrowding and deplorable conditions of similar institutions during that era. Sadly, as time went on the center would grow to suffer from the same problems it sought to rectify. At its height in 1953, the facility was home to 9,303 patients and its original mantra of rest and relaxation for the ill had been abandoned in favor of more dramatic procedures such as lobotomies and electro-shock therapy.

As modern medicine began to better treat the mentally ill, the need for a facility as large as the Kings Park Psychiatric Center dwindled proportionally. It would officially close in 1996, but the spirits of those who once lived there remain in those buildings which still stand, empty and abandoned by the living.

Though trespassing on the Psychiatric Center's grounds is entirely illegal and the facility is now regularly patrolled by police, locals and visitors to Kings Park have still been known to sneak into some of the abandoned hospital's buildings*, leading to a large amount of vandalism and graffiti in the decaying psych center. There have also been reports of ghosts paranormal happenings within the campus. Trespasses claim to have seen apparitions, heard disembodied screams, and witnessed doors open or close on their own.

Those who visit the bar, D.S. Shanahan's, which is located just outside of the Kings Park Psychiatric Center's grounds, have also made similar claims. A female apparition allegedly appears at the bar from time to time, but quickly vanishes when approached. Employees and visitors have said they've witnessed the unidentified ghost standing in the hallway, or even sitting at the bar.

Locals have also spotted ghosts through the windows of multiple buildings on the old campus and have reported hearing the screams of patients who died there. The rattling of chains has also been heard, and it is not uncommon to hear tales of strange phenomena from those who have broken into the site. Access inside the buildings is now prohibited, but local roads and paths allow for a look at their creepy exterior.

Through the trees and fog
Source: Joe Galletta via LongIsland.com

A Shot of the Kings Park Psychiatric Center from Afar
Source: Doug Kerr via Flickr

An inside Look
Source: Anthony Loganzo via LongIsland.com

A Peek Inside
Source: Anthony Loganzo via LongIsland.com

View from a Distance
Source: Joe Galletta via LongIsland.com

Mouse over photos to see photo credits.
Nearby Real Haunts