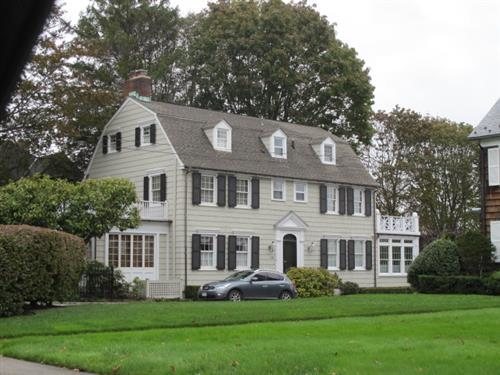 During their stay, the Lutz family encountered a swarm of flies (despite having moved in the midst of winter weather), cold spots and strange odors in areas with no ventilation to explain either, and a hidden room which terrified the family dog. Missy Lutz, then five-years-old, developed an imaginary friend named Jodie—a demonic pig-like creature with glowing red eyes. On Christmas Day her father, George, saw Jodie staring down at him from Missy’s window; the creature was gone when he sprinted upstairs, but a rocking chair was still moving back and forth when he arrived. His wife, Kathy, also saw a pair of glowing red eyes after shutting Missy’s window, and a trail of giant cloven hoof prints were found in the snow on New Year’s Day.

Many other incidents occurred during the Lutzes’ brief stay. Kathy received red welts on her chest and once levitated above her bed, she and George both saw the image of a demon burned into the back of the fireplace, and objects would often move of their own accord, sometime harming the family in the process or producing strange odors. Today the house is a private residence and is not open to the public.

Most recent information on the home is that it was listed for sale in 2016 because the owner wanted to downsize after her husband had passed away. The home on Ocean Ave. was listed for $850,000 and was purchased by a new owner in early 2017 for way less than its asking price - $605,000.