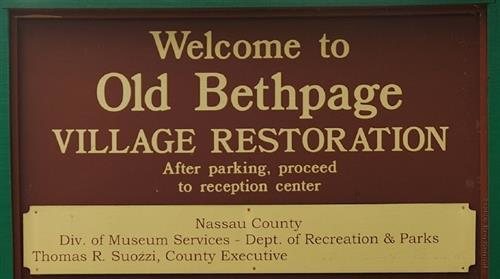 Old Bethpage Village Restoration will give you a glimpse into the past with historic buildings and recreations of early 19th century life, but if you’re lucky you may even get a look at an actual resident of pre-Civil War Long Island. These building come from all over LI, and many have brought their ghosts with them! One of the more famous haunted sites in the village is the Conklin House, a fisherman’s cottage originally from the Village of the Branch. A woman in period dress (and not an actor working for the Restoration) has been reported on the upper floor, and one employee says he saw a shadow running towards him only to vanish when he peered up for a closer look. There have also been unexplained loud banging sounds.

The Hewlett House has also seen a multitude of ghostly activity, including an incident in which a worker felt a hand on her shoulder, but found no one to be there when she turned around. Two other women reportedly held a séance and contacted the ghost of Lewis Hewett who said he was hanged from the stairwell, and a security guard once reported hearing strange voices coming from the basement.

Other haunted sites at the Restoration include The Noon Inn, the Kirby House, and the Williams House. The Williams house in particular seems to be a hotbed for ghostly activity, with reports from workers of the sudden slamming of doors and windows (including those that have been propped open) and the movement of objects when their backs are turned. Another worker heard a small, ghostly voice tell her to “put my teacup down” after she picked up a toy teacup while cleaning the home.