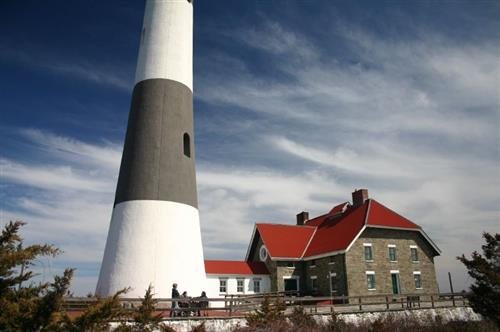 The Fire Island Lighthouse is a Long Island landmark that is well known among locals and can be spotted from a distance while driving down Ocean Parkway and while crossing over the Robert Moses bridges, heading to the beaches.

Most Long Islanders are familiar with the famous Fire Island Lighthouse, but not everyone knows the historical building is haunted by a caretaker who oversaw the demolition of the original lighthouse and construction of the current one!

While the lighthouse was being demolished and reconstructed in the mid-19th century, its caretaker was forced to live in a poorly insulated shack nearby. The winter was harsh, and his daughter died shortly after falling ill; though a doctor had been summoned he could not arrive in time to treat her. The caretaker’s wife took her body to be buried in Sayville, but he could not attend the funeral as he had to keep the house lit for nearby ships. One night the light went out; when locals came to investigate they found the caretaker’s body hanging from a rope.

Visitors still report seeing the pale visage of the caretaker pacing about the lighthouse, or hear him walking the stairs and opening or closing doors. Some even report the sound of maniacal laughter, or see the keeper with rope in hand.