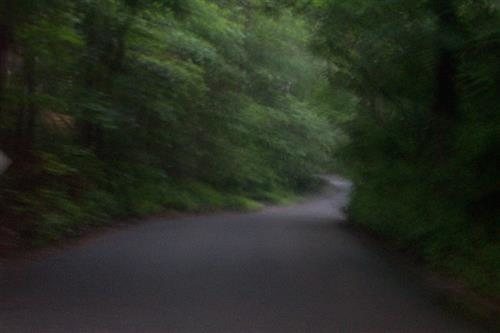 In addition to being located right next to Mount Misery, a ghastly location in its own right, Sweet Hollow Road is the site of several ghostly legends. The most tragic among them states that a school bus full of children was driving along the Northern State overpass bridge above Sweet Hollow Road on a snowy day. After its driver lost control, the bus skidded off the bridge, killing everyone inside. It is said that if you stop your car under the bridge and put it in neutral the spirits of the deceased children will push you forward. That same bridge is also the subject of another story in which three boys allegedly hanged themselves; if you look up at the overpass while driving underneath it you may catch a glimpse of their bodies.

Another legend involves a day camp which supposedly existed along the road during the 1930s. Some of the children who went to the camp are said to have been abused or even killed, and their spirits can occasionally be seen walking along the road wearing ‘30s clothing, though they quickly vanish. Sweet Hollow Road is also said to be home to a police officer who was shot and killed. His ghost still patrols the street and will pull motorists over from time to time, but after letting them go he turns about to return to his car only to have his head blown off by a shotgun.

Finally, the road is also the subject of one of the Mary’s Grave legends. This version takes place centuries after most of the others, but still involves a young woman named Mary who suffered a tragic fate. Mary is said to have gotten into a fight with her boyfriend while driving down the road and was then either pushed out of the car by him or jumped out of it herself; in either event, she was quickly hit by oncoming traffic and died. Some say you can still see a lady in white walking along the side of the road, and that she will jump in front of your car when you pass. Mary’s grave and tombstone are also alleged to be located in a small cemetery on Sweet Hollow Road.